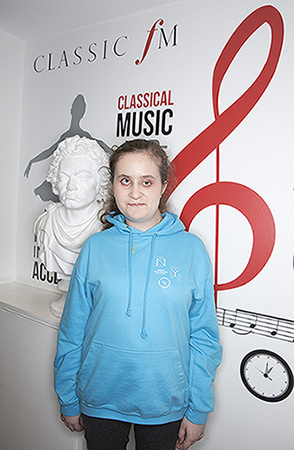 After having improvised music for six years, Xia Leon Sloane, born in 2000, began taking formal composition lessons at the age of 12. Since then, they have been a composer with Aldeburgh Young Musicians, The National Youth Orchestra and the Britten Sinfonia Academy as well as a First Study Composer at the Royal College of Music Junior Department. They have been fortunate enough to have been selected as the winner of The Cambridge Young Composer of the Year, the Joan Weller Composition Prize, The Humphrey Searle Composition Award, the Royal Philharmonic Society/Classic FM 25th Birthday commissions and the BBC Proms Inspire Young Composers’ Competition. Their work has been performed by The BBC Concert Orchestra, VOCES8, The Aurora Orchestra, The Ligeti Quartet, The Brodsky String Quartet, The Hermes Experiment, The Phaedra Ensemble, Dr K Sextet, St Catharine’s Girls Choir, Kings Junior Voices and Ensemble 10/10, among others. They have also written for soloists such as Huw Watkins and Oliver Coates. Over the years, Xia has been generously supported by the Amber Trust, The Humphrey Searle Foundation and by a Gough Kelly Award at the RNCM.

In summer 2021, Xia graduated from the Royal Northern College of Music with First-Class Honours as a Principal Study Composer under the tutelage of Professor Emily Howard, Dr Laura Bowler and Steven Daverson. In September 2021, they started a Master in Composition at the RNCM studying with Dr Laura Bowler and Steven Daverson. Xia hopes to become a professional composer and writer. Their poetry is often metrically free with a strong focus on imagery and sonority. They are deeply concerned by the environmental, social and political issues that exist in contemporary times, and both their musical and literary work often reacts to one or more of these. As a Buddhist, Xia feels that it is essential for activism to be creative and compassionate, and hopes to develop their art with this in mind.